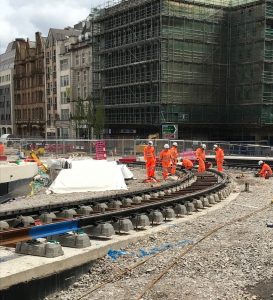 The first pieces of tram track have been laid along Paradise Circus marking a significant step forward in the extension of the West Midlands Metro network.

Forty-six metres of twin track have been installed along the curved section of the A38, which closed to traffic in summer 2018 to allow these essential Metro works to take place. It means that track for the first phase of the extension, which will run from Grand Central to Centenary Square, is now halfway complete.

Paradise Circus was closed in both directions to facilitate the Metro construction from Victoria Square to Centenary Square and is set to reopen later this year as testing, commissioning and driver training takes place.

Mayor of the West Midlands Andy Street said: “This milestone is yet another sign of progress on this extension and shows we are on track to have trams running to Centenary Square by the end of this year. But this is just a small part of the story, we are delivering a revolution in transport for the people of the West Midlands with huge investment in new rail, tram, rapid bus and cycling over the next few years.”

Councillor Waseem Zaffar, Cabinet Member for Transport and Environment at Birmingham City Council, added: “This Metro extension is set to bring fantastic benefits to the city, helping to strengthen economic growth and better connect people to other areas of the region, making it easier for those living, working and travelling in the area to get around.  Increased public transport provision is also essential if we are to encourage more people out of their cars, reducing congestion on our roads and helping to improve our air quality. I am pleased to see that this project is making significant progress and that Paradise Circus will soon be reopened.”

To mark the milestone, time-lapse footage has been released by the Midland Metro Alliance capturing the construction progress from the date of the closure to the first tracks being laid.

Paul Brown, Construction Director for the Midland Metro Alliance, said: “That we have laid half of the track from Grand Central to Centenary Square is a clear sign that the works are continuing at pace and on schedule to open for passenger service in December. We are thrilled to have laid the first tracks in Paradise Circus in what is a pivotal moment in the Birmingham Westside extension.”

The extension will follow on from the current Grand Central terminus, which opened for passenger service in May 2016. Once completed, the Metro will operate between Grand Central and Hagley Road in Edgbaston, improving transport links in the heart of Birmingham, making journeys faster and more accessible, in turn helping businesses and supporting more jobs.

When fully complete, five new tram stops will connect passengers to Victoria Square, Centenary Square, Brindleyplace, Five Ways and Hagley Road, with step-free access to popular attractions including the Birmingham Museum & Art Gallery, the International Convention Centre and Symphony Hall. More people will also be able to use the Metro for day-to-day travel in this area, reducing road congestion in the city centre, as well as improving sustainable transport options along Broad Street and beyond.

Construction of the second phase of the route, which is anticipated to open for passenger service in 2021 in time for the 2022 Commonwealth Games, is currently underway following the closure of Five Ways underpass earlier in June.