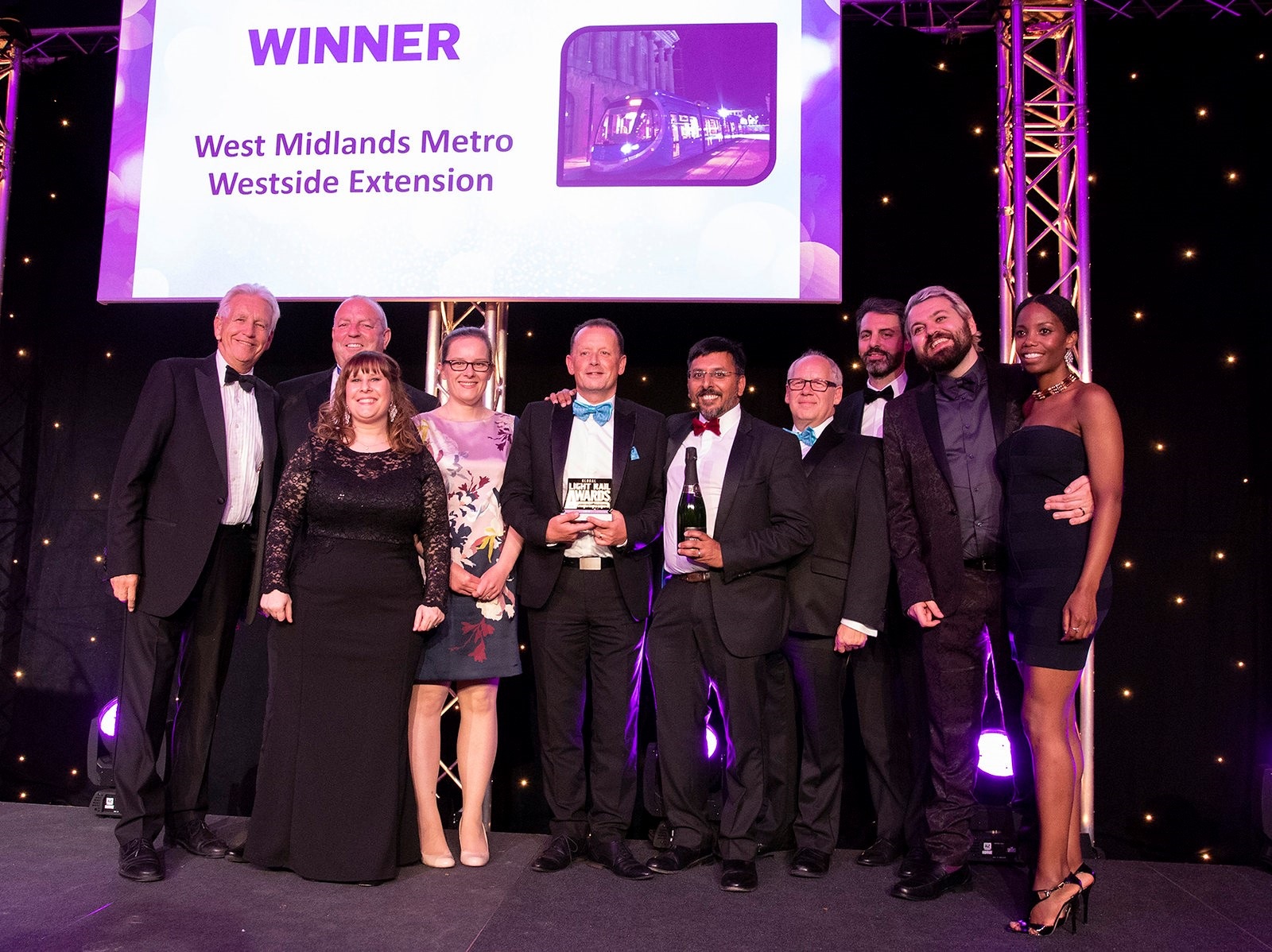 The project to expand tram services through the heart of Birmingham city centre has won a major accolade at an international awards ceremony for the light rail sector.

West Midlands Metro, alongside colleagues from Midland Metro Alliance, secured top honours in the Outstanding Engineering Achievement category for the first phase of the Birmingham Westside extension which the tramway from its current terminus at Grand Central to Centenary Square.

Metro was also Highly Commended in two further categories at the prestigious 2019 Global Light Rail Awards held in London, whilst Tom Maplethorpe, Target Cost Manager at the alliance, was named Employee of the Year.

Carl Williams, Metro Director of Operations, joined colleagues and representatives from the alliance on stage to collect the engineering award and the members of the Metro team for their commendations for Team of the Year and Significant Safety Initiative categories.

“The Metro was certainly in the spotlight at what is recognised as the light rail sector’s ‘Oscars’ – an event that celebrates excellence the industry across the world,” he said.

“Alongside the engineering award we were very proud of the efforts of our HR team, which was commended in the Team of the Year category for developing a bespoke training scheme with local colleges to address sector-specific skills gaps and also the commendation for our project to introduce a new ‘near-miss’ reporting system to further improve our already excellent safety record. The fact that we had such a strong showing reflects the hard work and dedication of everyone working on our growing network.”

Award judges were impressed by the way the Birmingham Westside project had overcome the challenge of extending the tramway through an historic city centre by pioneering the use of battery power. Testing is now underway on the UK’s first trams capable of catenary-free operation on a new stretch of line that has presented its own, unique engineering challenges.

Alejandro Moreno, Director of the Midland Metro Alliance, the organisation responsible for designing and delivering extensions to the network said: “Winning the outstanding achievement award is an excellent accolade for the team. Construction on the Birmingham Westside Metro extension has really started to gather pace in recent months, with all track now installed for the first phase of the extension to Centenary Square. I am delighted that the team’s hard work has been recognised in this way. A very well done also goes to Tom Maplethorpe whose dedication and commitment has been instrumental to the continued success of the alliance. It is fantastic that his individual success has been recognised within the light rail industry.”

The Midland Metro Alliance was also shortlisted in the Best Customer Initiative category for its partnership working with Transport for West Midlands (TfWM) and Birmingham City Council in helping to keep Birmingham moving during the closure of Five Ways underpass, as construction for the second phase of the Westside extension to Edgbaston ramped up.