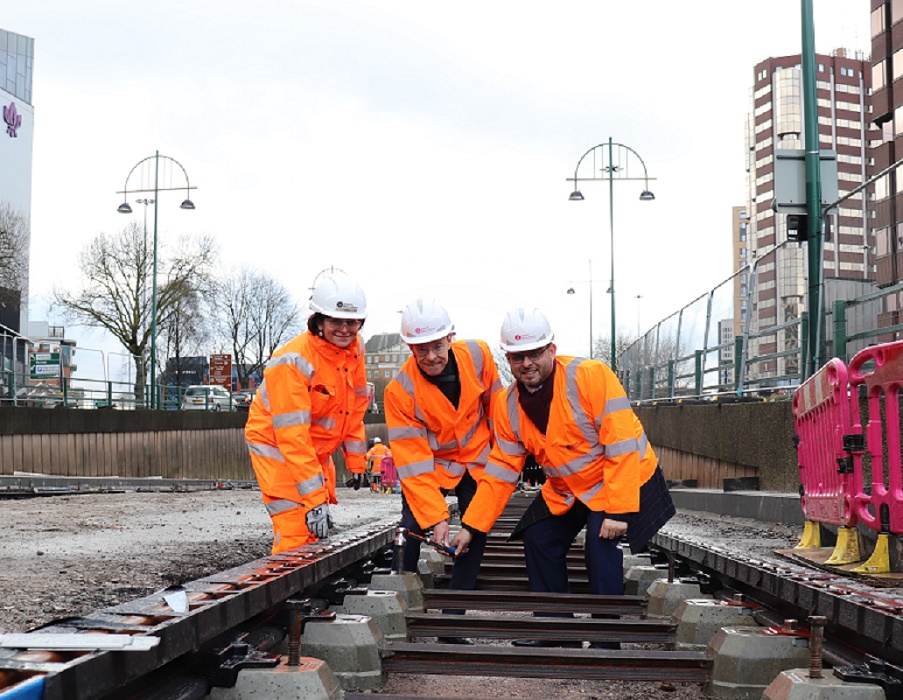 The first stretch of tram track has been laid in  Five Ways underpass as construction of the West Midlands Metro extension to Edgbaston continues at pace.

About 100 metres of track has been installed in the underpass, which closed to traffic in late spring 2019 to allow the Metro works to take place. It means 10 per cent of the line for the second phase of the Birmingham Westside Metro extension, which will run from Centenary Square to Hagley Road in Edgbaston, has now been laid and welded into place, marking a significant step forward in construction.

Construction for the new route commenced with the closure of the underpass in June 2019. It is being planned, designed and delivered, along with a number of other tram extensions in the region, by the Midland Metro Alliance on behalf of Transport for West Midlands (TfWM), which is part of the West Midlands Combined Authority (WMCA) and has embarked upon an ambitious plan to regenerate the region, providing new opportunities for residents and businesses by transforming public transport in Birmingham city centre.

Andy Street, Mayor of the West Midlands, said: “I am delighted that we have reached yet another milestone in the expansion of the Midland Metro in Birmingham. After recently opening stops at Victoria Square and Centenary Square, it is great to see the track now already laid for the extension up Broad Street. For decades the West Midlands was left behind when it came to transport investment, and so it is incredibly pleasing to be able to get on and deliver for the people of the region. This extension in particular will help bring some great benefits to the West Midlands, not least better connectivity and a boost to the local economy.”

Speaking about the milestone, Councillor Waseem Zaffar, Birmingham City Council Cabinet Member for Transport and Environment, said: “It is great news that seven months after the underpass closed to traffic construction has hit a significant milestone and tram tracks have been installed at Five Ways. I’m sure those who live, work and visit Birmingham will be pleased to see that construction on this important public transport project continues to progress. We want to encourage everyone to consider alternatives to the car wherever possible.”

Paul Brown, Construction Director for the Midland Metro Alliance, added: “We are thrilled to have laid the first tracks in the underpass, just a short time after it was closed to traffic. It is great that we are able to celebrate yet another success following the opening of the route from Grand Central to Centenary Square, ahead of schedule. As the year progresses, those in the area will see the team busy at work in Broad Street and the Five Ways area as construction ramps up.”

When the route opens to the public in 2021, three new tram stops, connecting passengers to Brindleyplace, Five Ways and Hagley Road, will follow from the current Library terminus, which opened for passenger service ahead of schedule in December 2019. West Midlands Metro services will then operate between Wolverhampton and Hagley Road in Edgbaston, improving transport links across Birmingham and parts of the Black Country, making journeys faster and more accessible, in turn helping businesses and supporting more jobs.