A new partnership to revolutionise the £1.2 billion construction of future tram routes across the West Midlands has been formally launched.

It consists of the WMCA, which owns the Metro, rail construction specialists Colas Rail – with Colas’ partners Colas Ltd, Barhale, Thomas Vale, which is part of Bouygues UK, and Auctus Management Group – and a consortium of design experts from Egis Rail, Tony Gee and Pell Frischmann.

The legal agreement formally setting the seal on the deal was signed at a ceremony in Birmingham on July 4 by WMCA, Colas, and Egis. 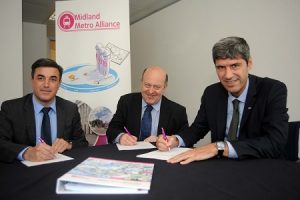 Jan Britton, chief operating officer of the WMCA, told representatives: “I’m really looking forward to seeing this alliance come to fruition in a way that we haven’t seen delivered before.

“The idea that we work together as a team – sharing risk, sharing the rewards, sharing the problem – is deeply important and very impressive.

“I think we couldn’t have a better starting point for the work of the Combined Authority.”

Laura Shoaf, managing director of Transport for West Midlands, the delivery arm of the WMCA, said: “The expansion of Midland Metro is a long-term investment programme and absolutely key to the WMCA’s vision for strategic growth and regeneration. 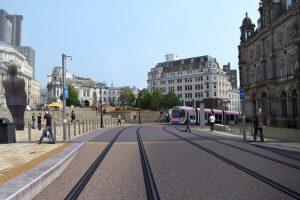 “The devolution deal the WMCA has signed will help secure £4.4 billion especially for our growth strategy to make the most of the HS2 rail line arriving, and as part of that the alliance has a critical role to play to deliver £1.2 billion of schemes over the next decade.

“We now have the funding in place to really push on expanding the Midland Metro and it is the perfect time for us to introduce this new way of working.”

Richard Fostier, chief executive officer for Colas Rail, said: “We are very proud to be here today forming part of this alliance.

“It is a very exciting moment for all of us to have this fantastic opportunity to bring together our alliance skills and our global capabilities and experience for the benefit of the West Midlands.

“Colas Rail is committed to giving its best through the Midland Metro Alliance to ensure the delivery to the inhabitants of Birmingham and across the region of a first class integrated transport system.” 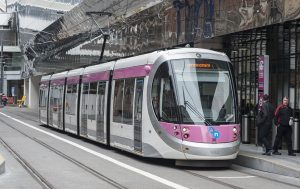 Olivier Bouvart, chief executive officer for Egis Rail, said: “A full integration between the owner, designer and contractor is the key to success for delivering complex urban transit systems.”

“We are very proud to put our 40 years’ experience in light rail systems at the service of the economic and social development of the West Midlands.”

The alliance is a shift from the traditional style of delivering major infrastructure, where contractors and designers are typically appointed on a project by project basis.

The agreement will see all parties in the alliance share the risks and rewards between them and will include a significant focus on how the partners work together and with stakeholders, businesses and the community. 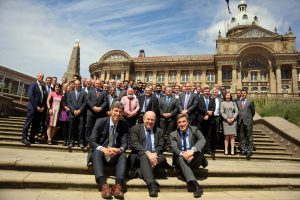 Work is now underway extending the route from New Street Station to Centenary Square, with services expected to start running in 2019.

Funding has also been earmarked for the line to go further along Broad Street, past Five Ways and on to Edgbaston by 2021.

The route of an extension through Digbeth in Birmingham has also been chosen, running from Bull Street via Albert Street and on to the forthcoming HS2 high speed rail station at Curzon Street.

From there it would go along New Canal Street and Meriden Street into High Street Deritend, stopping at Digbeth Coach Station and the Custard Factory. It is anticipated the line could be open by 2023.

In Wolverhampton, permission has just been granted by the Government to begin work on the £18 million city centre extension, with completion also scheduled for 2019.

The route will take trams along Pipers Row, stopping directly outside the bus station before continuing on to the railway station which will also be redeveloped as part of the Wolverhampton Interchange Project.

A business case is also being prepared to extend the Metro from Wednesbury to Brierley Hill.