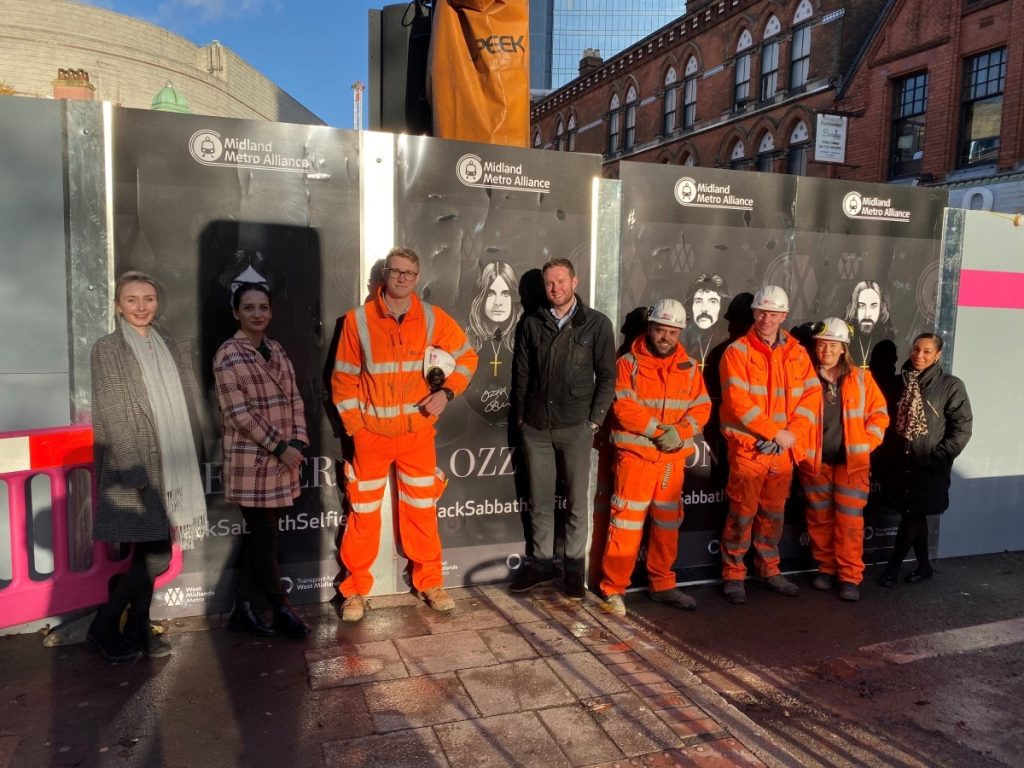 New hoarding paying homage to Birmingham band Black Sabbath has been installed in Broad Street as work to build the West Midlands Metro extension to Edgbaston rolls on.

The Midland Metro Alliance has erected new panels depicting the heavy metal band members – Ozzy Osbourne, Tony Iommi, Geezer Butler and Bill Ward – to help mark their 50th anniversary year and in recognition of a commemorative bench from Westside BID which normally sits in the area. Fans are being encouraged to pose alongside the images and share their selfies using #BlackSabbathSelfie.

Mike Olley, Manager of the Westside BID, said: “The Black Sabbath hoarding panels are a fantastic way to continue to honour the band while the bench is temporarily in storage. We are hoping that lots of fans will take up the opportunity to have their selfie taken against these special hoarding designs and share them using #BlackSabbathSelfie. Broad Street has such a lively and vibrant atmosphere and it is great to see the businesses promoted as being open as usual while the construction takes place, in such an innovative way.”

Tarek Abdelkawi, the artist who designed the Black Sabbath portraits, which are used on the bench, said: “Black Sabbath are a part of my history, as I listened to them growing up. It is a blessing to be contributing to their world in any way, just as they have contributed, rather largely, to mine.”

Paul Brown, Project Director for the Midland Metro Alliance, added: “While carrying out our essential bridge strengthening works, we wanted to ensure that we maintained the homage to Black Sabbath and have worked closely with the Westside Bid to design these special panels. The bench will be returned once these works are complete and we would like to thank those who have been impacted by our works for their patience and understanding.”

The two-phase Birmingham Westside project follows the Metro extension from St. Chads to Grand Central, which opened for passenger service in May 2016. Once completed, services will operate between Grand Central and Hagley Road in Edgbaston, improving transport links in the heart of Birmingham, making journeys faster and more accessible, in turn helping businesses and supporting more jobs.

Construction for the new route commenced in June 2017 and along with a number of other tram extensions in the West Midlands, is being planned, designed and delivered by the Midland Metro Alliance on behalf of Transport for West Midlands (TfWM), which is part of the West Midlands Combined Authority (WMCA). The WMCA has embarked upon an ambitious plan to regenerate the region and provide new opportunities for residents and businesses.

Five new tram stops will connect passengers to Victoria Square, Centenary Square, Brindleyplace, Five Ways and Hagley Road, with links to popular attractions including the Library of Birmingham, Birmingham Museum & Art Gallery, the International Convention Centre and Symphony Hall, allowing more people to use the Metro in this area for day-to-day travel, reducing road congestion in the city centre, as well as improving sustainable transport options along Broad Street and beyond.