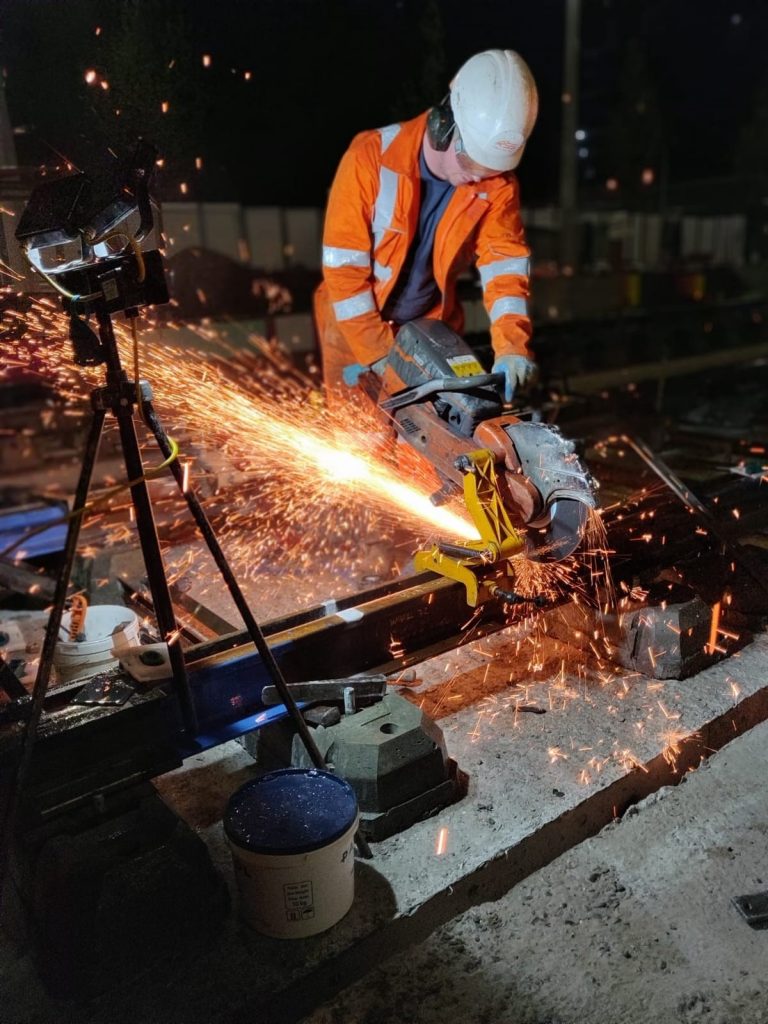 The first phase of the Birmingham Westside Metro extension moved closer to operation today as the last piece of track was welded into place in Centenary Square.

The milestone, which means Metro services to a new terminus outside the Library of Birmingham continue to be on track to commence in December 2019, was celebrated with photos of the moment the tracks were welded by the construction team of the Midland Metro Alliance who have helped design and build the route.

Andy Street, Mayor of the West Midlands, and Councillor Waseem Zaffar, Birmingham City Council Cabinet Member for Transport and Environment, sent their congratulations to the workers as the project prepares to enter its stringent testing and commissioning stage.

Mr Street said: “It is amazing to think that the track which is newly laid and welded in Centenary Square is now connected all the way to Wolverhampton, and within a few short years will further extend across even more of Birmingham and the Black Country. Since taking office in May 2017 I have had the pleasure of working closely with the team at the Midland Metro Alliance, and I want to thank them all for their hard work in making this project happen.”

The two-phase Birmingham Westside project follows the Metro extension from St. Chads to Grand Central, which opened for passenger service in May 2016. Once completed, services will operate between Grand Central and Hagley Road in Edgbaston, improving transport links in the heart of Birmingham, making journeys faster and more accessible, in turn helping businesses and supporting more jobs.

Construction for the new route commenced in June 2017 and along with four other tram extensions in the West Midlands, is being planned, designed and delivered by the Midland Metro Alliance on behalf of Transport for West Midlands (TfWM), which has embarked upon an ambitious plan to regenerate the region and provide new opportunities for residents and businesses.

Five new tram stops will connect passengers to Victoria Square, Centenary Square, Brindleyplace, Five Ways and Hagley Road, with links to popular attractions including the Birmingham Museum & Art Gallery, the International Convention Centre and Symphony Hall, allowing more people to use the Metro in this area for day-to-day travel, reducing road congestion in the city centre, as well as improving sustainable transport options along Broad Street and beyond.

Speaking about the milestone, Councillor Zaffar, said: “This next stage of the Birmingham Westside Metro extension will transform the way people are able to travel across the city centre. By the end of the year those living, working and visiting Birmingham will have the option to visit and enjoy city centre attractions, such as the entertainment and hospitality offerings in Brindleyplace and Broad Street, by an additional form of sustainable public transport. The team at the Midland Metro Alliance have done a fantastic job in building first-class infrastructure at a relatively swift pace and I’d like to thank them for their efforts.”

Alejandro Moreno, Director of the Midland Metro Alliance, said: “It has been incredibly exciting to celebrate the final piece of track being connected in Centenary Square. There are more than 300 men and women working across the alliance’s projects in the West Midlands and I’d like to thank each and every one for their hard work. In the city centre, specifically, we’re moving to a new stage of the project and over the coming months those in the area will witness construction areas in the city centre reducing. At this time we would like to thank those who have been impacted by our works for their patience and understanding.”

For any further information about the work, including any traffic or pedestrian changes following construction completion, please visit: www.metroalliance.co.uk.