Metro development and operations teams in the West Mid 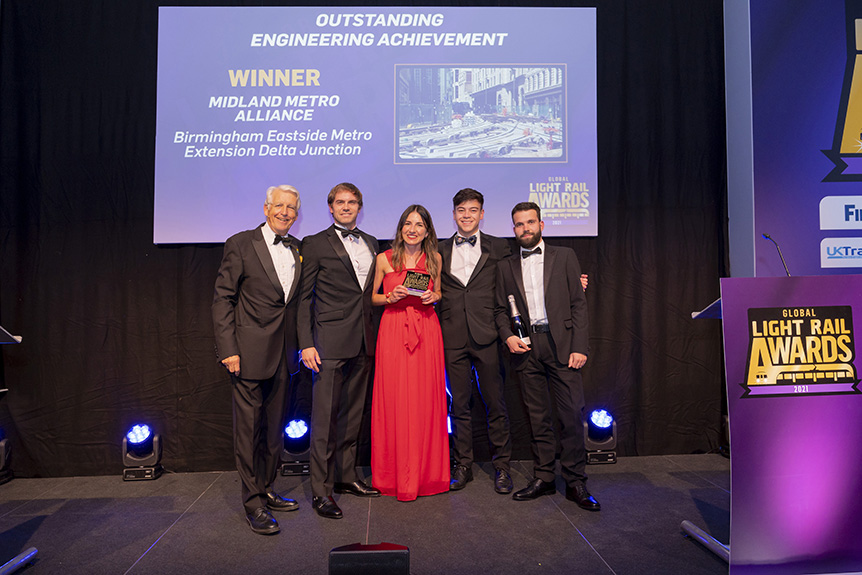 lands are celebrating after being recognised with  a number of prestigious accolades at the annual Global Light Rail Awards.

The awards, presented yesterday evening (6 October) at an in-person ceremony in London for the first time since 2019, celebrates and rewards the most outstanding contributors to the Light Rail industry from across the globe.

The Midland Metro Alliance (MMA), which is planning and delivering a number of tramway extensions on behalf of Transport for West Midlands (TfWM), was chosen as winners in two categories:

The second city’s Metro developments were further recognised with the alliance being “Highly Commended” in the ‘Project of the Year’ category for the Westside Metro extension project to Edgbaston Village noting how a considerable amount of the delivery of this anticipated route took place during the heights of the Covid-19 pandemic.

There were also celebrations for Metro operations with Midland Metro Limited (MML), the operator of West Midlands Metro, which was ‘Highly Commended’ in the hotly contested ‘Most Improved System’ category, facing stiff competition from Europe and beyond.

Andrew Laville, Midland Metro Limited’s Management Information System (AMIS) Implementation Lead, was also celebrating on the night after being ‘Highly Commended’ as a Rising Star while Crew Supervisor Dan Jordan received similar recognition in the Employee of the Year category,  at the light rail industry event.

Speaking of the regional successes, Andy Street, Mayor of the West Midlands, said: “It is brilliant to see the success of our Metro teams at yesterday’s ceremony. Winning accolades for the complex engineering the team has achieved is fantastic, as is the recognition of the record investment we’re providing to extend our metro across the region. To be chosen as winners ahead of international entries from as far and wide as America, Europe and the Middle East does really illustrate how we’re leading the industry from right here in the West Midlands. A huge congratulations to the teams at Midland Metro Alliance and West Midlands Metro on their success.”

Much of the focus of the evening’s successes were around Metro enhancements in Birmingham including new routes out to the east and west of the second city.

Councillor Waseem Zaffar, Birmingham’s Cabinet Member for Transport and Environment, said: “It is clear from yesterday evening’s event that Birmingham is putting itself on the map when it comes to light rail development and delivery. I’m really pleased that the teams both delivering extensions and operating existing routes received the recognition they deserve.” 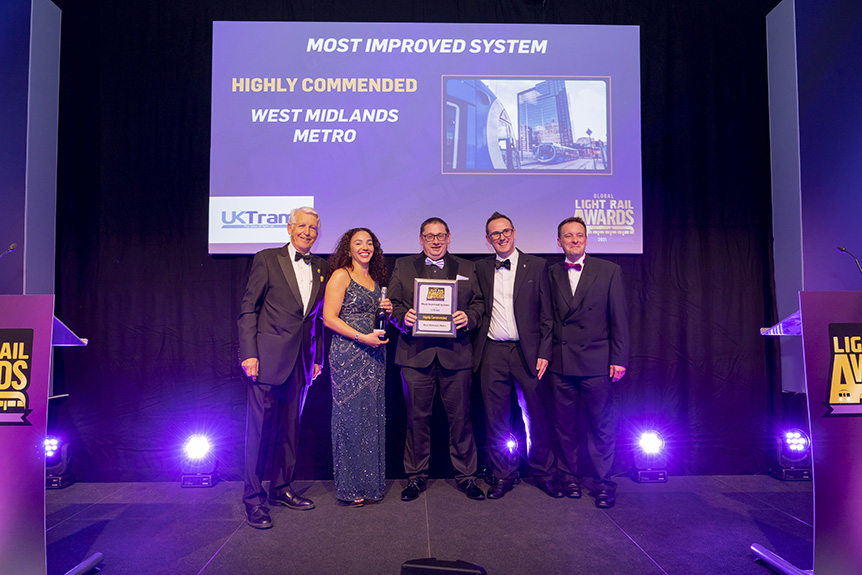 In all, Midland Metro Alliance and Midland Metro Limited were nominated in ten of the 16 categories shortlisting entries on the night, including nominations in:

Peter Cushing, Director of Midland Metro Alliance, said: “Winning the Outstanding Engineering Achievement award is an excellent accolade for all aspects of this massive project – from our designers, to the team on the ground who are building this impressive piece of equipment. We were thrilled to see Marta, our Project Manager for this project, recognised too as a Rising Star in our industry. It is a truly deserved appreciation and highlights the fantastic diversity which is present in our sector.”

Sophie Allison, Metro Commercial Director, commented: “We are delighted that the West Midlands was so well represented at these prestigious awards, and for recognition of the strides we are making towards delivering an even better service for customers as we look towards further expansion. To have two Metro employees ‘highly commended’ in different categories for their enthusiasm, dedication and professionalism also reflects the commitment of the Metro team to provide a safe and secure, reliable and sustainable service for our customers.”

For more information on the awards, you can visit the ceremony’s website.