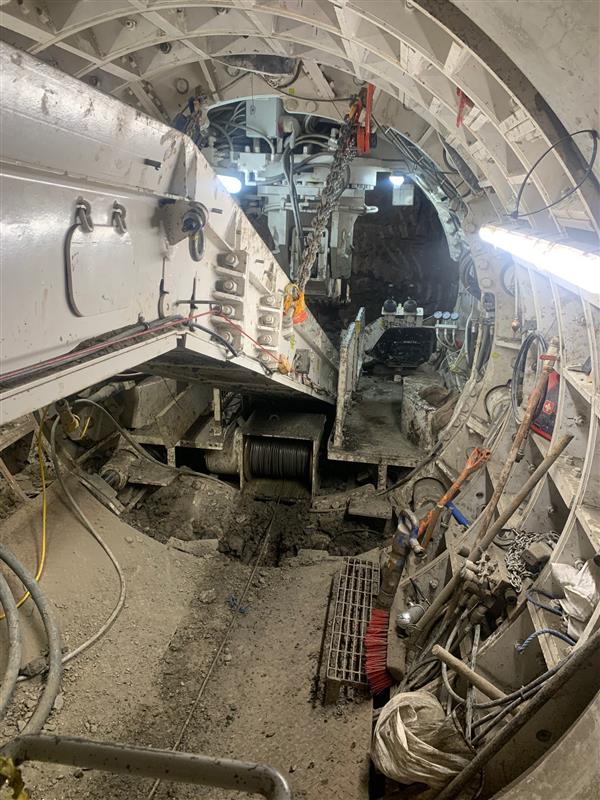 The design and build of a unique tunnel shield has proved instrumental in Barhale successfully reaching the main Thames Tideway Tunnel following a 215m pipe jack.

The civil engineering and infrastructure specialist achieved the milestone as part of the programme of works to build the West Putney Storm Relief Combined Sewer Overflow (CSO) at Barn Elms in Richmond, West London.

The connection tunnel has been constructed 30m deep within the London Clay Formation by a 215m long 2.5m diameter pipe jack which will be finished with a 2.2m internal diameter secondary lining. Through a vortex generator and a drop tube, it connects the newly constructed CSO drop shaft located at Barn Elms Sports Centre with the main Thames Tideway Tunnel located below the river Thames.

“We encountered some difficult conditions in the early stages of the pipe jack which damaged some of the reinforced concrete jacking pipes as they were jacked in behind an open backhoe-type Tunnel Excavator Machine (TEM),” he said.

“With the support of the project team, we developed an innovative solution to help us quickly identify and replace any cracked pipes. It saw us design a bespoke recovery shield which we were able to manufacture in house through our fabrication arm BCS Group.

“The recovery shield not only enabled the damaged tunnel to be replaced but also provided access to the TEM face to enable repairs and enhancements to be conducted. Additionally, the purpose made TEM was designed to allow complete dismantling at the end of the blind tunnel drive to allow the final connection to the main tunnel to be completed.”

Peter Leyton, Construction Director for the joint venture, praised the Barhale team for its hard work and effort in getting the TEM to the main tunnel connection.

“The resolution in the team, to come from where we were earlier in the year and then work through all the issues that were put in the way, is a huge testament,” he said. “Also, the control of the movement in the main tunnel has been excellent and a great reflection on the efforts put in by all of the team.”