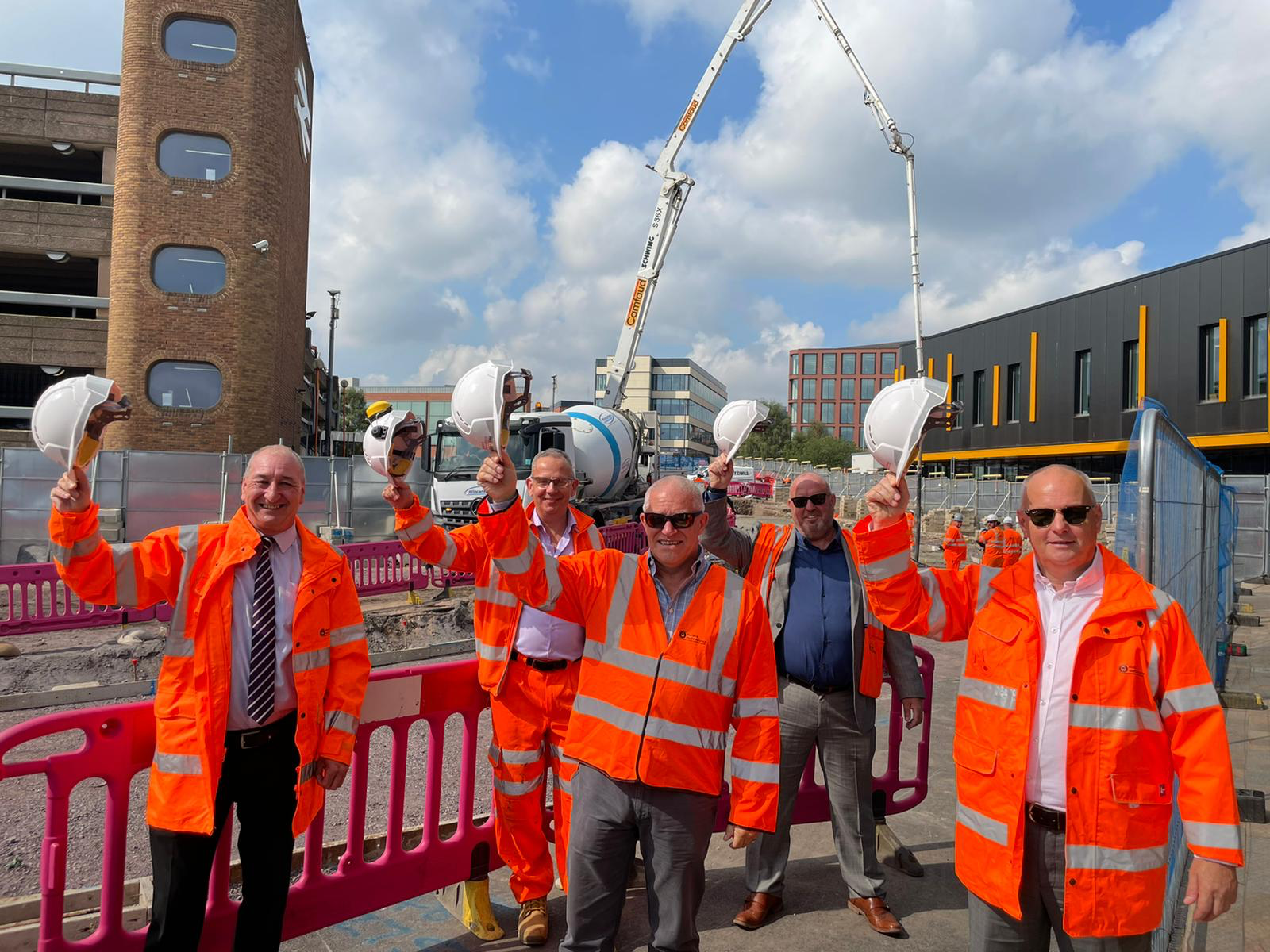 A significant concrete pour has taken place on Railway Drive in Wolverhampton for the Metro extension which links bus and train with tram signalling, ensuring that the project remains on track following a return to site earlier in the summer.

The last phase of main construction for the scheme is currently taking place outside the revitalised Station Plaza following completion of the city’s new railway station. The concrete pour comes ahead of the first tracks being laid in this section later this month.

Midland Metro Alliance (MMA), working on behalf of Transport for West Midlands (TfWM), returned to the city centre in June to carry out a series of works to complete the project ahead of the line opening for passenger service. Further construction activity will continue throughout the summer and winter months, including finishing works along Pipers Row and track laying on Railway Drive.

Andy Street, the Mayor of the West Midlands, said: “It is brilliant that just a few weeks after opening phase two of the new railway station, we’ve been able to press on and make significant progress on the city centre Metro extension. Not only will this extension provide a further improvement to public transport services within Wolverhampton, but it also means that residents in the city will be able to travel seamlessly across the West Midlands. Infrastructure projects such as these are key to the region’s economic recovery from the pandemic as we help create and protect local jobs, and I look forward to seeing continued progress over the coming weeks and months.”

Councillor Steve Evans, City of Wolverhampton Council Cabinet Member for City Environment and Climate Change, added: “A lot of hard work has been undertaken to deliver an Interchange scheme which will give our city the attractive public transport gateway that it deserves. It was fantastic to see the work underway today for the Metro and it is all the more impressive that this activity continues to be safely delivered by the team on site with the challenging circumstances of the ongoing pandemic. The Interchange is a big part of how we are re-imagining and re-inventing our city centre to help boost the local economy, create jobs and make the most of our neighbouring canalside areas, where we have major housing plans.”

The Wolverhampton City Centre Metro extension is part of City of Wolverhampton Council’s and Transport for West Midlands’ plans to create a seamless transport interchange in the city centre. Once completed, West Midlands Metro will serve two new tram stops; one at the city’s bus station on Pipers Row and one at Wolverhampton railway station, allowing people to easily change between other modes of transport to continue their journeys.

Midland Metro Alliance, together with local authority partners and TfWM, is committed to delivering Metro extensions across Birmingham and the Black Country as part of a collective aim to improve public transport in the region. Following the government’s clarification that construction is able to continue during the pandemic, activities will continue to take place with an abundance of caution and the safety of teams and the public in mind. In a further attempt to protect its staff, the MMA has also rolled out regular lateral flow testing to all those working on the projects.

Paul Brown, MMA Construction Director, said: “It was brilliant to celebrate a real-step forward for this project with today’s concrete pour. I am sure that those who are now using the revitalised railway can now see how much closer we are to opening the Metro line, too. We continue to work closely with our partners at City of Wolverhampton Council, Wolverhampton Business Improvement District, Network Rail, West Midlands Trains and Transport for West Midlands to keep local people informed.”