Civil engineering and infrastructure specialist Barhale will lead a new scheme to protect critical water infrastructure from the impact of erosion on the Suffolk coastline.

The £4.7million programme of works will be carried out at Corton Beach, Lowestoft on behalf of Anglian Water by Barhale as part of the @one Alliance, the collaboration of consultants and contractors working together to deliver more than half of Anglian Water’s capital investment programme.

Continued coastal erosion has made it necessary to move three sewer pipes that currently run along the beach to a new route approximately 100 metres inland. They include the primary 700mm  Lowestoft domestic wastewater pipe which runs to the Lowestoft Water Recycling Centre (WRC) to be treated before being taken away by a  second 800mm pipe to the Nesspoint outfall. A third pipe (300mm), dedicated to the nearby Birds Eye factory will also be moved. 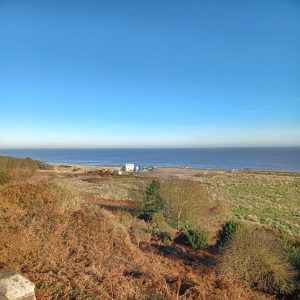 The replacement pipework will be laid through opencut to a depth of 2.5m in ductile iron with a special lining to protect against saline water.

The new route will take the pipelines through the Gunton Warren Nature Reserve and the project has been subject to intensive involvement from East Suffolk Council, ecologists, arboriculturists and Suffolk Wildlife Trust to ensure there is minimal impact on the environment and ecology found in the reserve. It has also led to the agreement of a five year plan on completion of the project that will deliver a net biodiversity gain of 10%.

Barhale’s contract manager, Stuart Kempster underlined the importance of the works and of proactively managing the risks presented by coastal erosion.

“This is a critical project to protect the water infrastructure of Lowestoft and the surrounding area,” he said. “Anglian Water’s early intervention will significantly extend the life of the existing assets and ensure that the retreating coastline does not have any impact on waste water management.

“Anglian Water and the @one Alliance have been very mindful of the new pipeline route and have worked closely with stakeholders to create a post-completion ecology programme that will actually enhance biodiversity. We are proud to be playing our part not only in leading these important works but also helping to make sure that we leave the site with the best possible future.”

Work is scheduled to start in early 2022 and to take approximately 12 months.